At the moment Kisslicer is my favourite software to make code for my printer:

1) Its VERY fast, on some other slicers a huge model might take 20minuites or even longer to turn into code. With KS that is reduced to perhaps 2 mins.
2) The results are almost always very good (once you find a base configuration). It rarely lets me down with unexpected behaviour
3) It can cope with very large filesize CAD models. Some other packages cannot open very large models without graphical problems or crashes.

However if you didnt use it before, its a real pain at first….so I put together some basic advice. 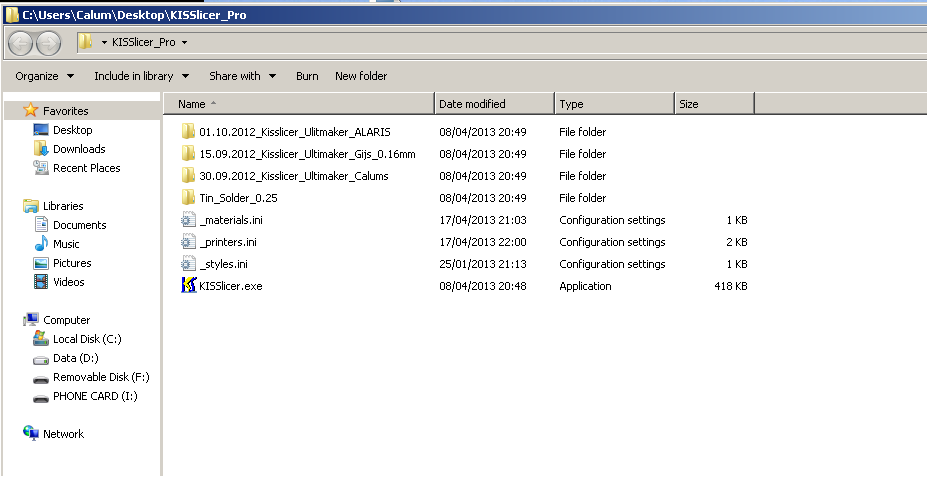 Here is what the file structure looks like in the directory where you have Kisslicer.exe (you dont need to “install” it, its an self executable). Just download Kisslicer, and download my sample settings files from my main “3D printer software” page…then put my 3 files in the same folder as the Kisslicer.exe. Then run it.

If you run Kisslicer without those files, it will “make” its own 3 setup files when you first use it. However these are all based on basic default settings and may not work very well with an Ultimaker. 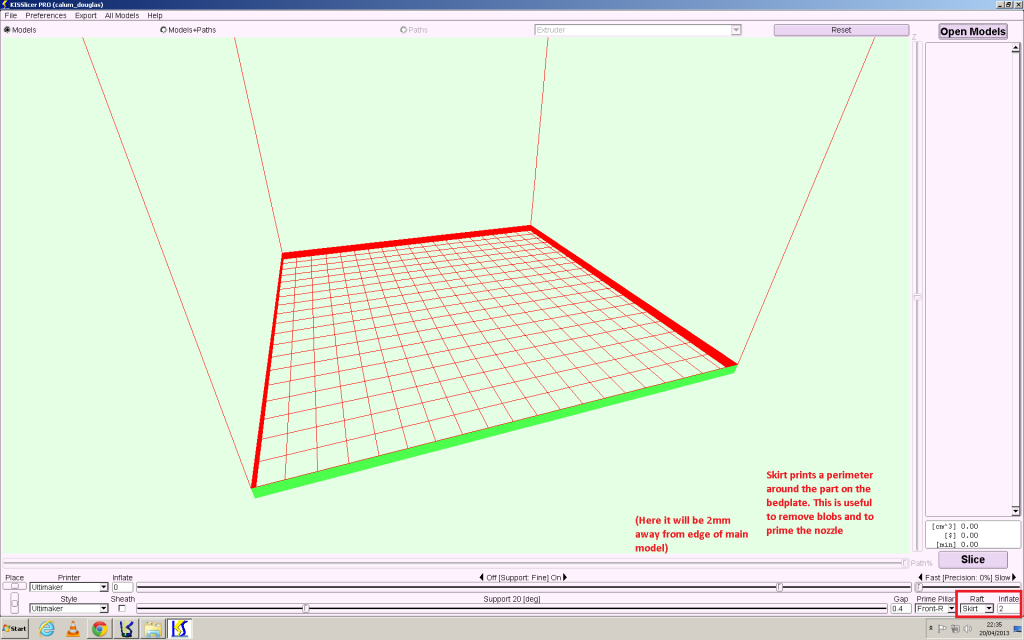 So now open Kisslicer, and you will see the screen above. I have put in horrid blocky red text from MS Paint some hints and tips in each image, so do open each one so you can see the details. 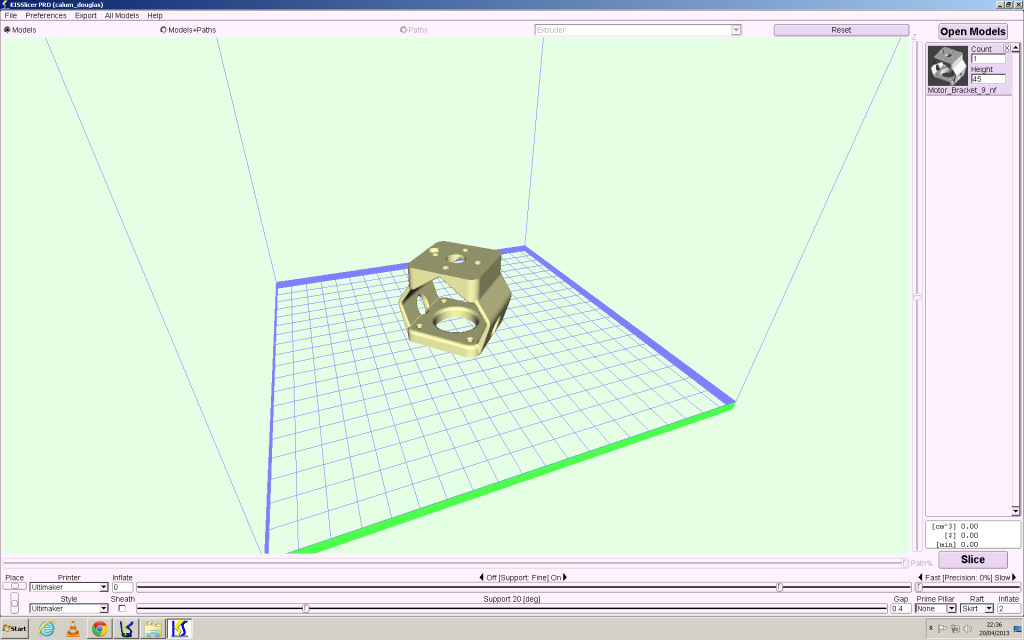 Ok so now we need an STL file to load. (STL stands for STERIOLITHOGRAPHIC and was a file convention invented to run 3D printers by 3D Systems Corp)
So click top right “OPEN MODELS”. 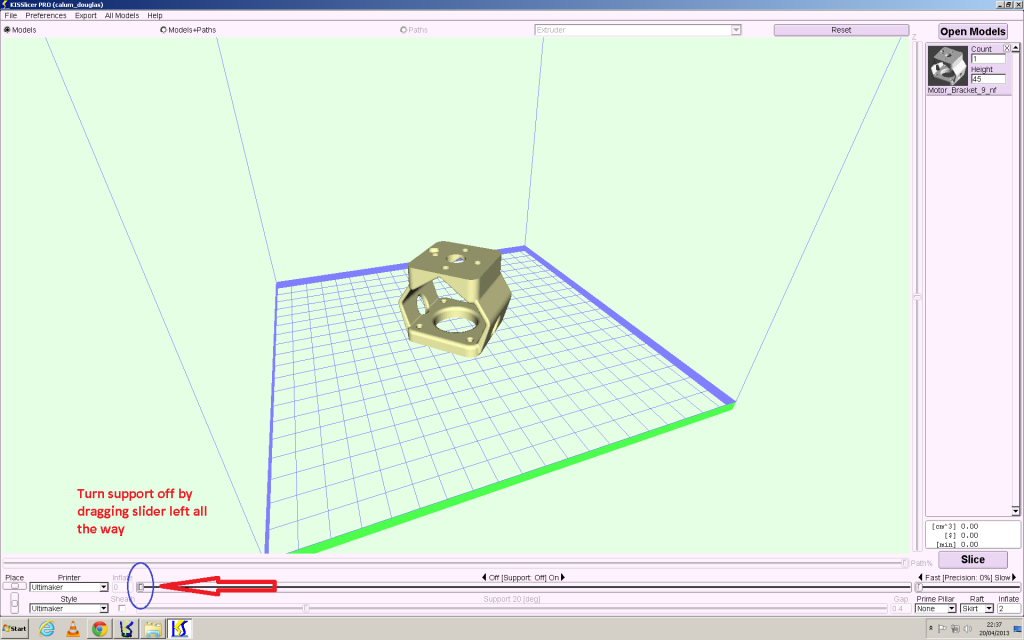 Ok now just one quick thing, im going to turn OFF support structure. We need support structure when we print overhangs that are so steep that the plastic has not enough vertical support
and just droops down. Or when you have something like a tree branch shape with parts hanging down that dont touch the bedplate. This will also not print ! However this model has
been designed to just about print acceptably with zero support structure. So I will turn it off with the slider at the base, sliding to the left. 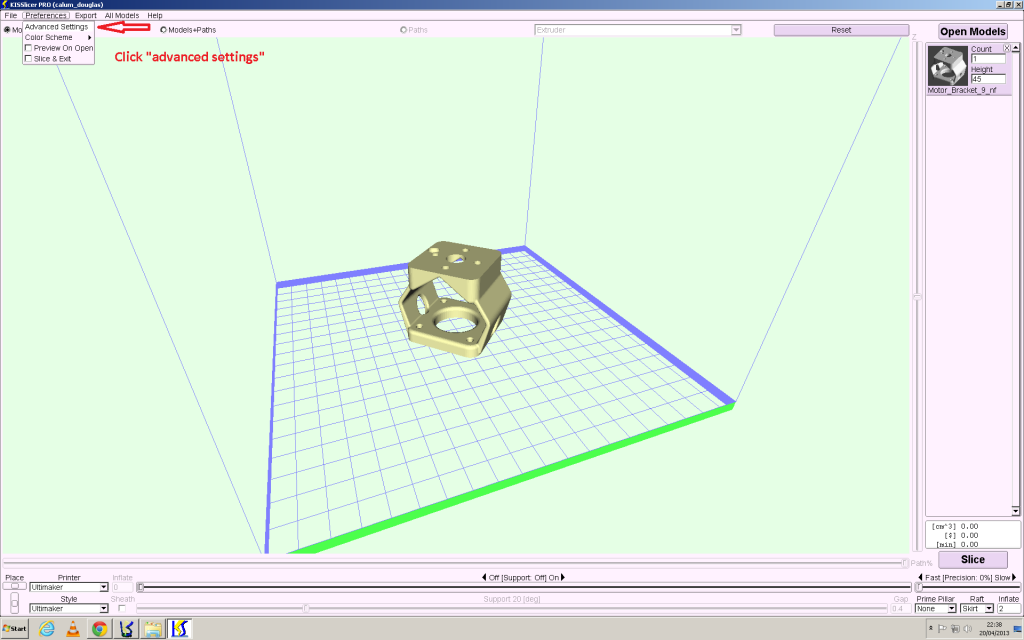 Now to see the fun stuff, we need to open Advanced Settings. Where all the interesting things are hidden away. I have paid a very small sum for a “pro” version of Kisslicer so if you have
just the free one, your options for multiple extrusion and a couple of others will be “ghosted out”. Buy KS its very very good, and makes better results for way less
messing around that programs costing 5x as much. Anyway… 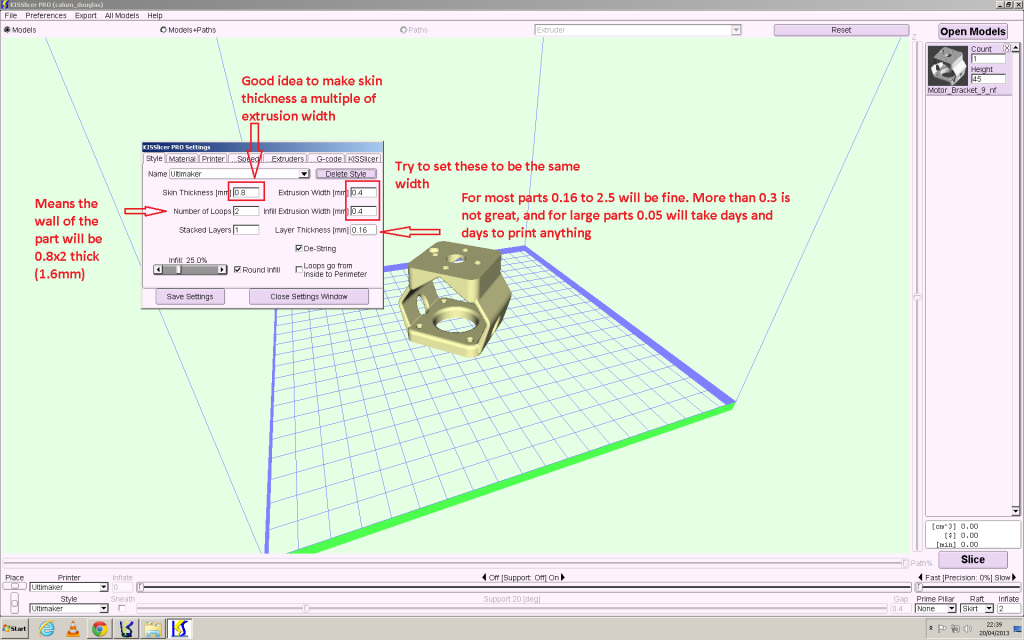 First item is the “STYLE” menu. This stuff is all controlled by the 3 text files you downloaded already from this site (the latest Beta version of KS, has 4 text files – but that is
not of any real importance here – its just some re-organization). 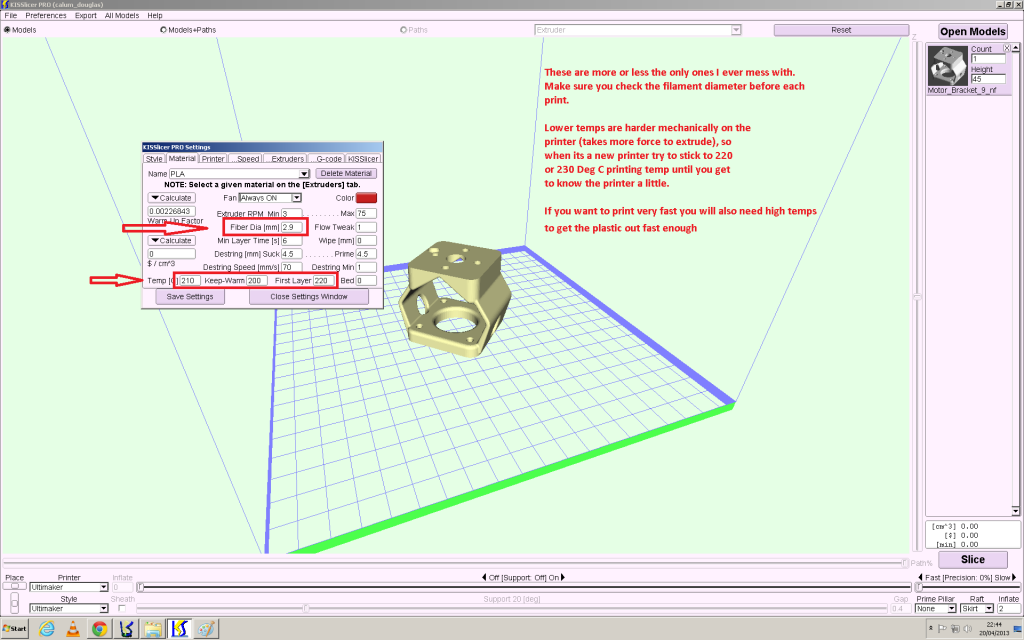 Next your “MATERIAL” settings 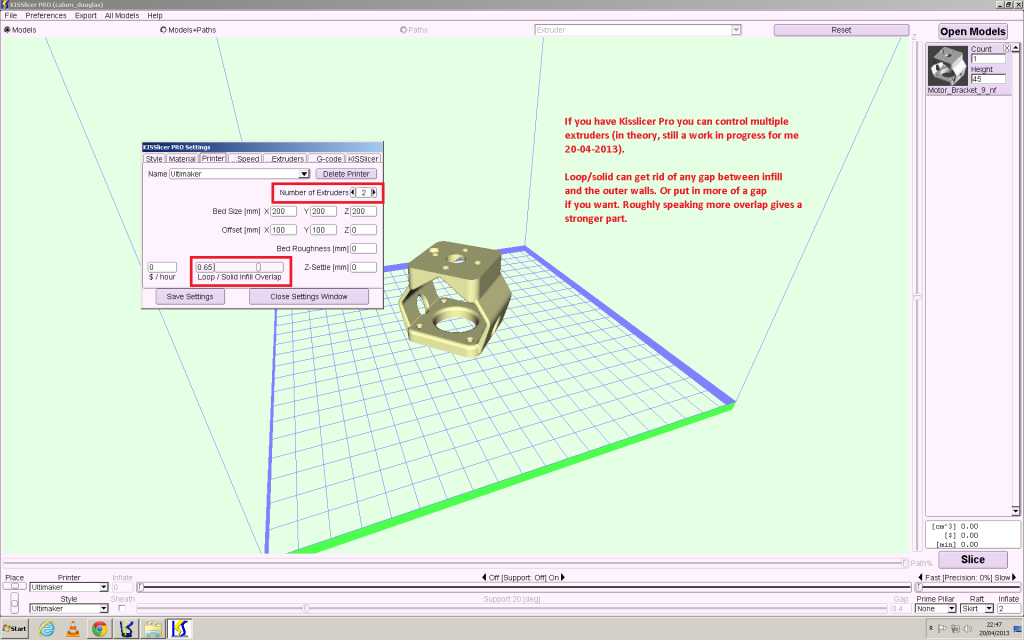 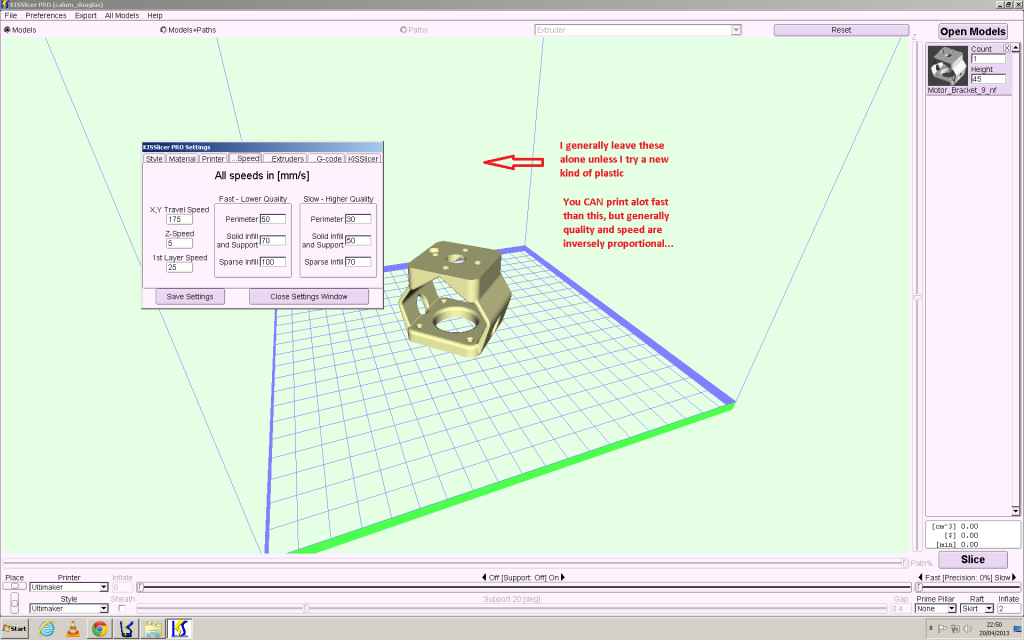 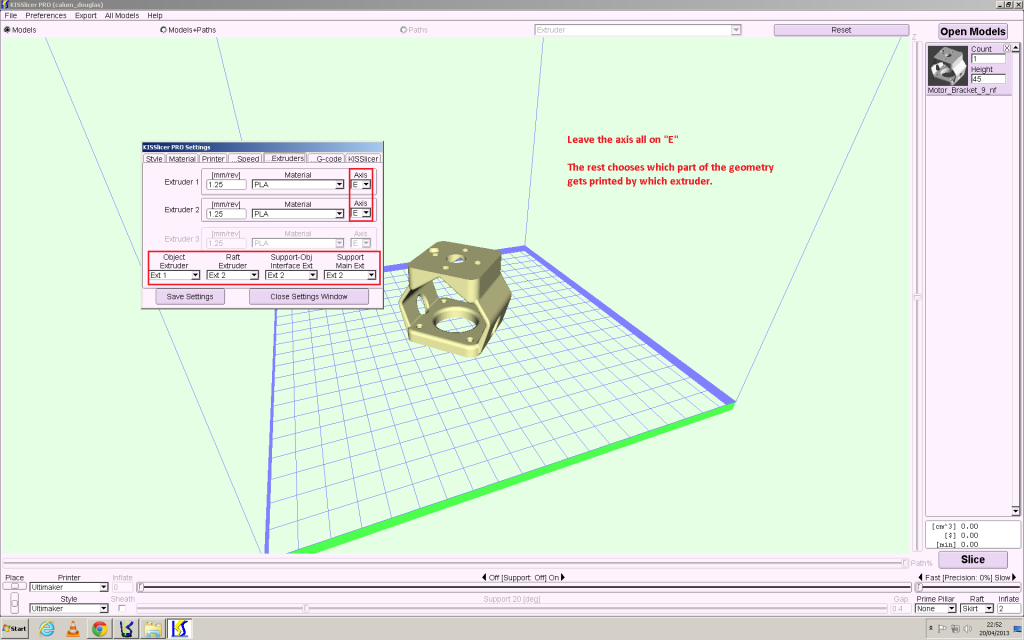 Set up the extruder/s (multi extruders for Pro Version only) 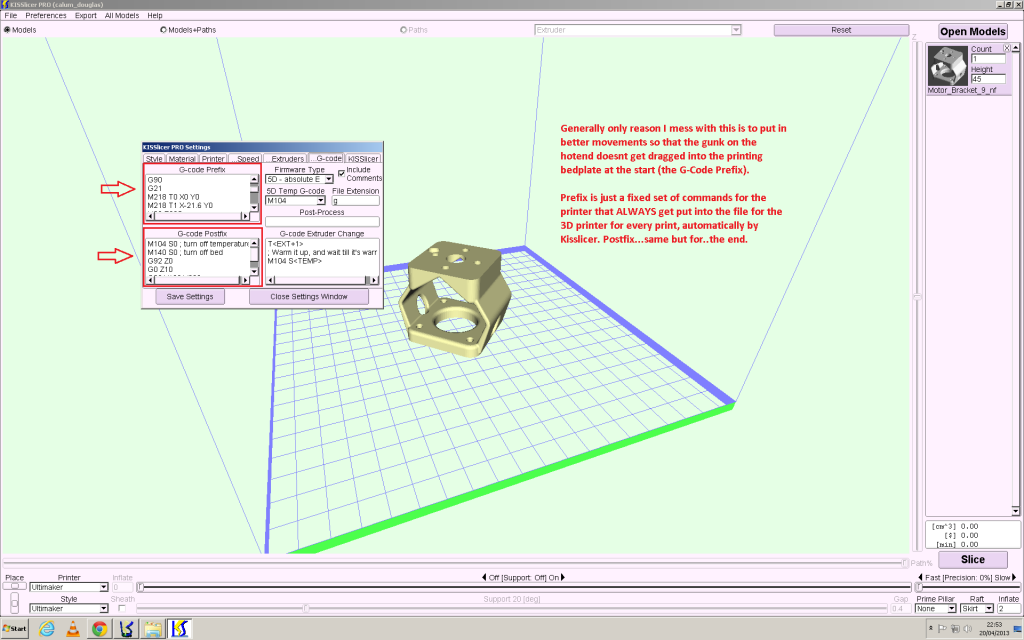 Set the Prefix and Postfix here 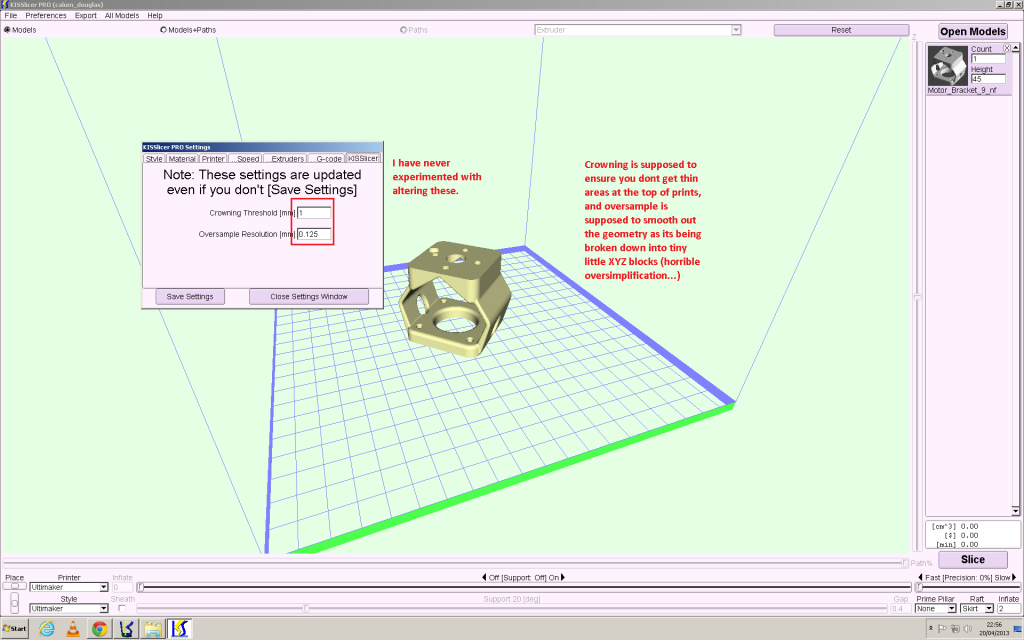 Only to “Pro version” owners

At this point we are ready to “slice” the STL file. So called because we picked a layer height (in Printers setup…) and the model will now be sectioned in layers of that height and a “toolpath”
constructed for each layer. 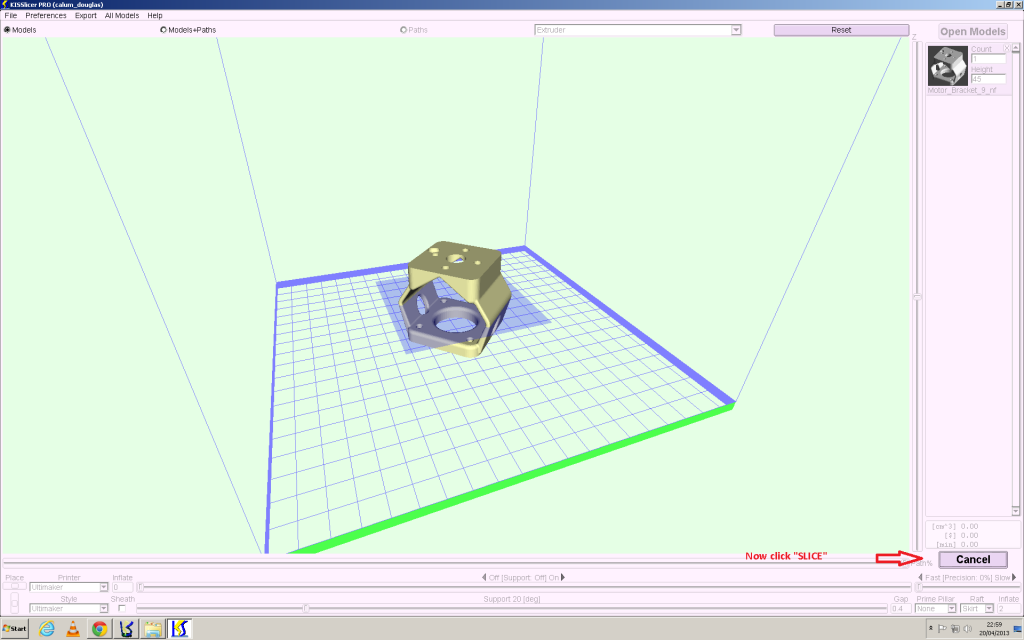 Now we can have a look at the result, its always good to check the toolpaths “look OK” before printing them. By clicking on the top bar of the screen you can select the CAD model
the CAD model AND the path, or just the toolpath only. 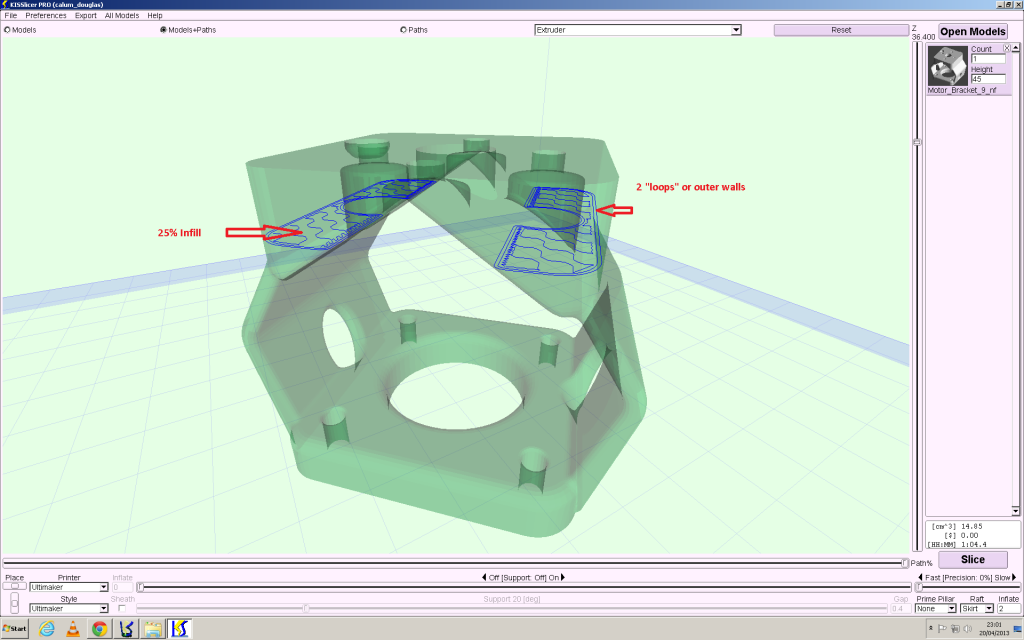 To make multiple parts at once, or to make the bits smaller or bigger you can do easily from the main screen. I find parts shrink about 0.5% with standard PLA, so if you didnt
scale your CAD model up by 0.5% now is the time to do so here, before you print it. Small holes are another matter and due to the “squish” from the extruder head the effect on
small holes is obviously greater as a percentage of their overall size. So even after scaling up 0.5%, anything smaller than a 10mm hole will certainly require a drill bit
shoved through if you want the size to be vaguely accurate. So even when scaled, a 3mm hole will probably end up about 2mm diameter after printing, and a 10 probably about 9.5 and so on.

Hole correction has been talked about as a possibly future software correction, but possibly due to difficulty of the software defining exactly what a hole IS, might not happen yet…. 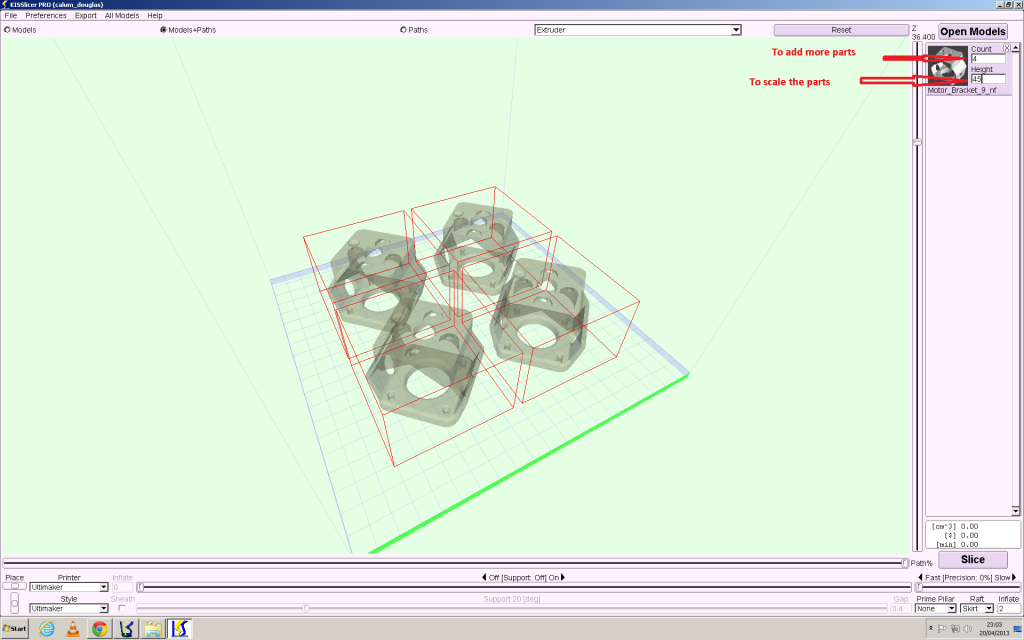